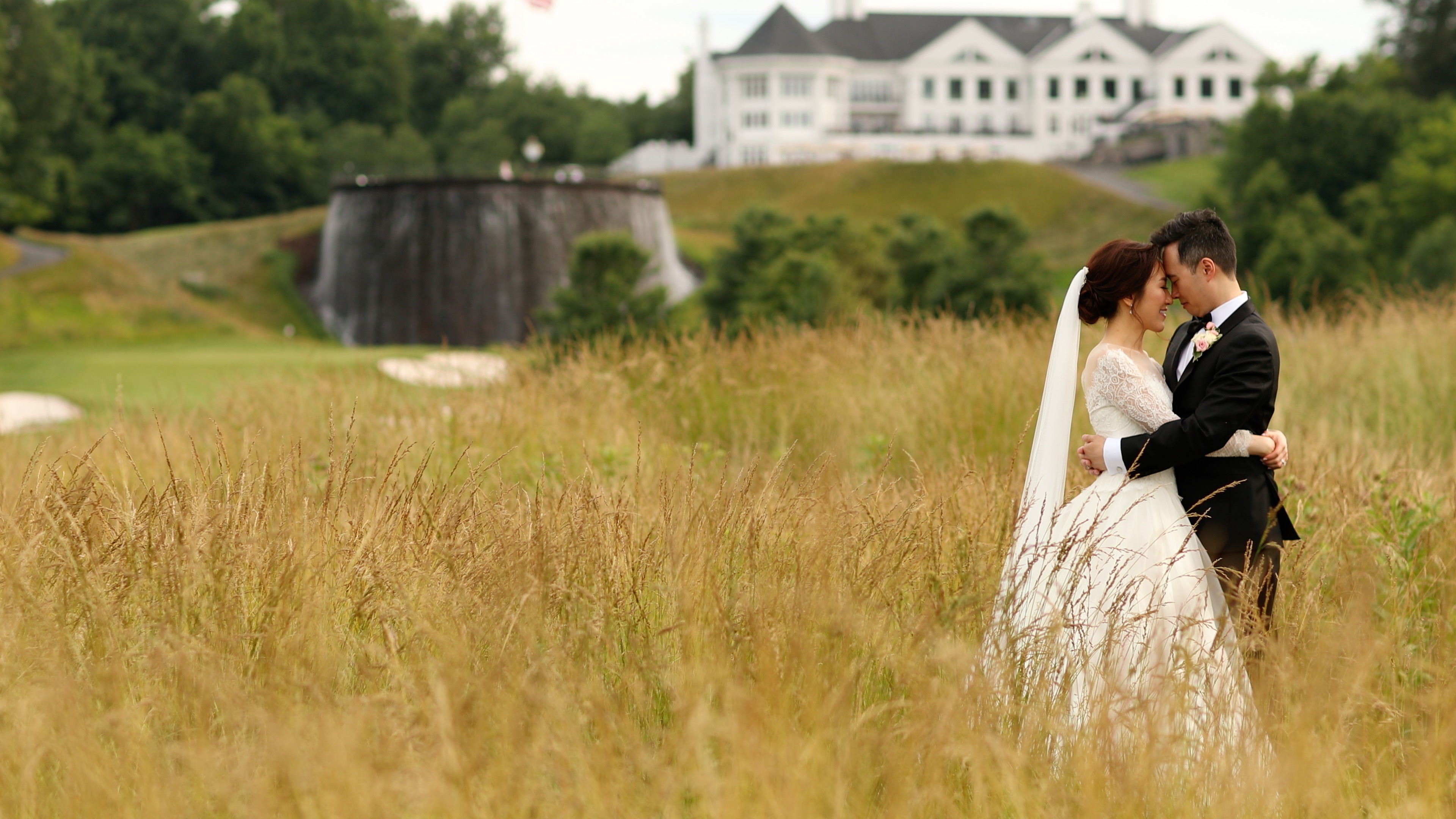 I swear we have the nicest couples. Anne & Matt kept up this streak on their beautiful day in Sterling, VA. My second shooter was with Matt and his groomsmen at Trump National Golf Club in Sterling, Virginia. While I was with Anne in the nearby townhomes capturing details and them getting ready before the first look the Golf Club.

So I didn’t grab my tripod because I thought we had to be as inconspicuous as possible. We headed to the bar and Trump noticed the couple and congratulated them. I think someone asked for a photo and he was willing. Fortunately with the ability to shoot in 120 fps and without my tripod, I captured some steady footage while having to be hand held. It made the cut!

Then after we headed to Our Lady of Hope Catholic Church a few miles away and began the ceremony. I love Catholic churches because they are long enough where I can have enough time to get creative shots as well as appreciate the sounds and beauty of the images of God and Jesus.

We also had some amazing vendor meals courtesy of one of Anne’s family members. Golf club venues apparently are not known for great vendor meals, so I was thankful to scarf down my lobster roll!

In conclusion, the reception continued into the night with the traditional events, but a not so traditional electric type of guitar instrument that I’ve never seen before during the open dance floor time. 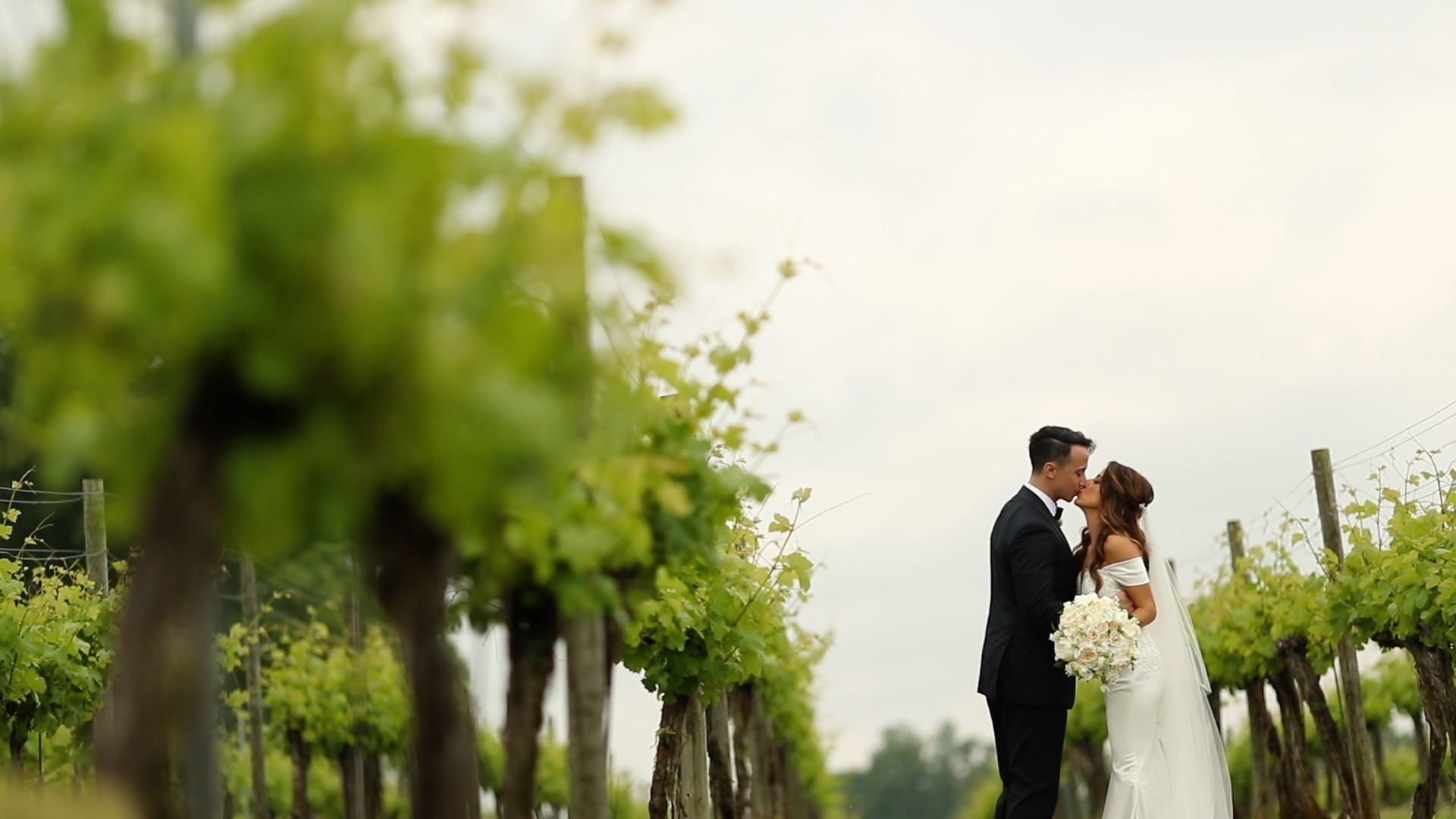 As soon as I arrived on premises of the Keswick Vineyards Charlottesville wedding , I started to fly the drone knowing my window of opportunity would be short because of the imminent rain. As soon as I began my flight back down to the ground, it started raining and I got enough drone footage.

Then we spent the morning with Armin & Eric in their rooms. They managed to not see each other, despite their rooms until the ceremony began.

They opened up their thoughtful gifts to each other and saw each other’s parents. It was already such an emotional day with tears of joy and a little sadness from rain ruining their dream of having a beautiful Persian outdoor ceremony.

However, as the ceremony time approached, the wedding planner from Cando Catering, saw a window of opportunity. The weather miraculously cleared up ONLY for one hour which was just enough time for their 30 minute-ish ceremony.

The team carried all the decor and setup of the ceremony that was already setup in the reception tent outside and the ceremony went off without a hitch.

There was even some time for some portraits of their families and bride and groom portraits! I’ve had a lot of clouds break just in time for sunset portraits, but I’ve never experienced the rain stopping just for the ceremony. The outdoor event truly helped the video come out more beautiful and it was such an awesome call from Cando Catering. Brilliant move!

The rest of the evening went beautifully planned. From Armin’s father’s awesome toast about F.O.B’s (fresh off the boat, you have to hear it!) and traditional dances and heartfelt toasts from Eric’s brother-in-law/best man & Armin’s older sister, the evening ended with dancing, and driving away in their vintage car.

Keswick Vineyards provided a perfect backdrop for this awesome, perfect couple and we couldn’t be more honored to have captured this day for them! Enjoy their Feature Film!